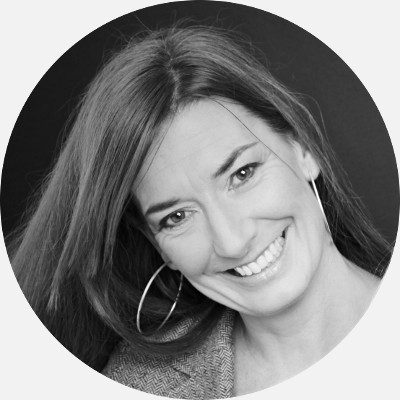 Art comes to Adastral
A message from Lisa Perkins, Director of Adastral Park
The University of Suffolk is looking to commission the installation of some permanent art at Adastral Park - we'd like to share the plans with our park residents.

As our community you are a key part of making Adastral Park as special as it is. Despite many of us not being on site currently, work continues on the development of our ecosystem and to drive real value from it. As I hope you all know, we are working with the University of Suffolk to welcome higher education students on to site through the DigiTech centre - which is a pivotal part of our programme to inspire the next generation of technologists and to bring in talent and skills to drive innovations.

We have a number of exciting developments happening under the DigiTech initiative at Adastral. Oberon is newly refurbished, and additional labs and teaching spaces are close to completion. Alan Rudge theatre is now a reinvigorated space for the lectures and talks, and our whole community can benefit from many of these updated facilities.

The engagement with the university also has the potential to bring a fresh touch to Adastral Park through an art commission. The university has collaborated with local artists to create an artistic 'wayfinding' solution across the park. It could be an exciting and enduring addition to site, and we have a proposal that I would like to share with you.

The consultation period for feedback closed on 7th June 2021. We'll announce the results following a review of the responses...

Discover the artwork
The brief asked for sculptures that marked DigiTech's arrival on the tech campus; objects of wonder plus some form of way-marking on a site without road names, but definitely not signposts. It also brought attention to the history of Adastral Park, the cosmic names on all of the buildings, and how they relate to the park being built on RAF Martlesham (the RAF motto being 'Per ardua ad astra' [through adversity to the stars]).
A local artist, Jamie Limond won the commission, answering the brief fully with his proposal to install two large sculptures with several smaller sculptures in between. The two main works are inspired by traditional landmarks and would be placed near to the two buildings in which Digitech will be based, Oberon and Orion. On routes between these and the hub, smaller artworks called 'Laterals' will act as a breadcrumb trail, linking the buildings and sculptures and indicating the way.
The inspirations for these three elements is described by the artist below, yet he makes clear that his interpretation is in no way definitive, everyone will bring their own meaning to the work, inevitably people will see new things as context advances. 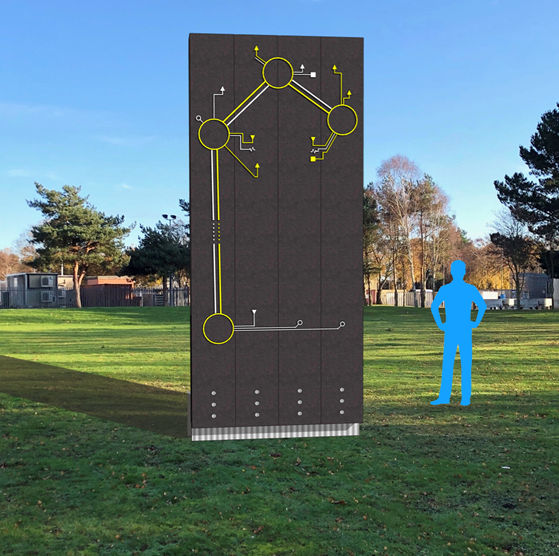 The Monolith: would be located near Oberon.
The Monolith 'Destinata est Futurae'
Instead of using traditional stone, the Monolith is made of scorched heart oak and stainless steel, materials that dovetail nicely with the theme celebrating Suffolk's coastal heritage.
The work stands firmly plugged into the landscape. Its surface is like a blackboard, but with raised markings of stainless steel gilded with rare earth metals used in electronics. The markings (both back and front) on the monolith entangle at least three interpretations: the topography of DigiTech's presence on the site, the National Quantum Network Hub symbolism, and the cosmic navigation of a star constellation, 'The Sculptor'.
The form of the monolith has many meanings and sources, one that the artist drew inspiration from was Arthur C. Clarke's sci-fi thriller 2001: A Space Odyssey, in which the mysterious appearance of the monoliths or 'machines' marked great leaps in the evolution of mankind. Another inspiration for the artist is mythology, the Titan Prometheus was the god of sculptors, being the mythical creator of mankind. Like Neil Gaiman, Limond enjoys linking ancient myth to the modern day, not unlike the way Stephen Fry has updated the language in his recent series of books on Greek mythology, and even Marvel's retelling of the Norse gods.
The name of the work 'Destinata est Futurae' links back to the use of latin in the RAF motto, the translation of the title is 'Mapping out a future'. 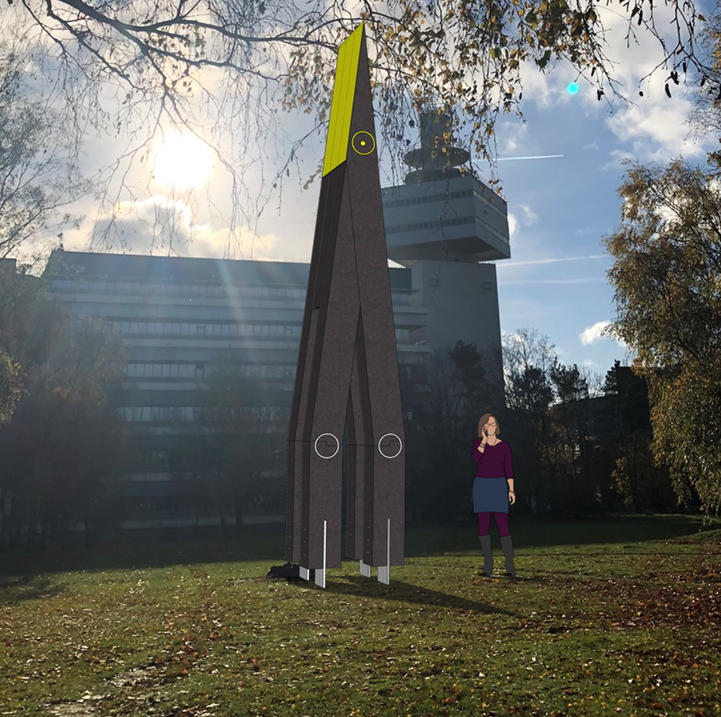 The Obelisk: would be located near Orion.
The Obelisk 'Quietam locus'
The obelisk, which marks the location of the acoustic suite in the Orion building, mimics the proportions of the sound absorbing wedges which line the walls of the anechoic chamber.
The markings depict the Circinus constellation, representing a pair of compasses. The two main works therefore bring together art and science. The inspiration for this work came from the myths of Hephaestus, the greek god of engineering, and their blacksmith (see also the Norse Völund and the Roman god Vulcan). A god of few words who was able to manipulate matter like no other, a gadget genius who created Hermes's winged shoes.
The top is gilded in gold, it was believed that obelisks would draw in the power of the sun through their golden peak. The form is more complex than the monolith yet the language is muted and toned down, matching the silence experienced within the anechoic chamber. Whilst the rings are fixed within space their connection is not overtly referenced by lines as they are on the monolith, instead this goes unspoken.
The two main sculptures are made of the same base materials but take up very different forms and communicate effectively whilst employing opposing methods.
Like the monolith, the name of the obelisk is in Latin: 'Quietam locus', which translates as 'Quiet Room' or 'Quiet Place'.
The Laterals
These sculptures are more overtly linked to a nautical reference mentioned earlier. Connecting with the University's Waterfront presence and the long held associations of Suffolk and its waterways, as recently highlighted by the Netflix film 'The Dig'. A film which retells the discovery of the Anglo-Saxon treasure, entombed in a royal longboat brought into the landscape. The treasure included Roman and Scandinavian artefacts, linking back to mythologies (NB, RAF Martlesham is mentioned in the film).
The route markers act like stepping stones through the park, joining the Oberon and Orion buildings with the hub. The symbols on the posts are cylindrical, therefore appear the same from all directions. They should also be recognisable as electronic symbols and would either be the bright colours shown, or clad in copper and zinc, relating to metals used in early batteries. The artist would be interested in your preference on these two options.
Limond would provide a QR code near to the entrance that links to the site map and the website. As the student enters the park with their QR code linked map or hard copy (with the red and green marks shown) they would see the first mark, they should be able to orientate the map using the entrance and the Pegasus Tower. All of the marks would be on the digital and updated site maps but importantly the next one along the path would be visible to the student. The two different marks help to remove some uncertainty if more than one mark is visible.

The Laterals: act as breadcrumbs between locations. 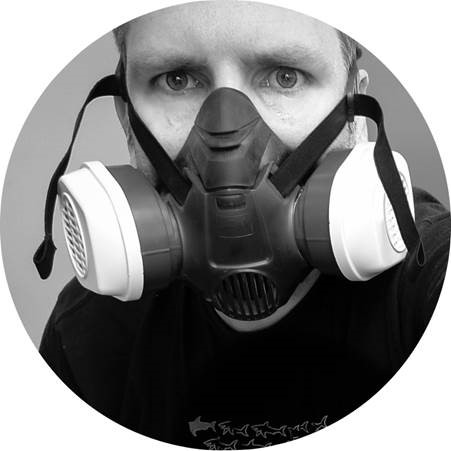 Jamie Limond is a British artist, who lives and works in Suffolk. Adopting a multidisciplinary approach, his practice spans sculpture, printmaking, photography, video, and installation.

As he lives with leukaemia, a heightened sense of mortality dominates Limond's investigation into the nature of existence. Informed by his background in engineering and a deeply held interest in philosophy, he is especially concerned by what can be revealed by examining that which has failed. In Heidegger's example, it is only when the hammer is broken, that something is momentarily revealed about its nature in the world.

Limond donates 15% of his art fees to the St. Elizabeth's Hospice in recognition of the support and inspirational art therapy provided by the hospice.

Recently his practice has focused on passing through landscapes - running, walking, hiking and making pilgrimages, and also seascapes - including river sailing in Suffolk and ocean crossings. An experienced sailor, Limond is a qualified Yachtmaster, learning to navigate by the stars.

In 2019 Limond was invited to present The Universal Avatar (2018) as part of 'Alive in the Universe' at the 58th Venice Biennale. A keen collaborator, Limond is a co-founder of the Aletheia Arts Collective, whose recent art video Chimera: 2020 was exhibited in the Chiaya Art Awards.